The CSRShot.dll is used to trigger seismic guns at pre-determined intervals along the planned survey line. It sends a message out a serial port to your equipment at a regular, user-defined distance interval along your planned survey line (not the trackline).

At each occurrence, you may choose to: 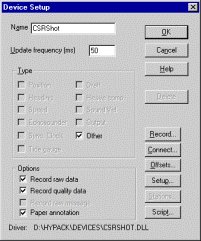 There are two key settings in the device setup dialog: 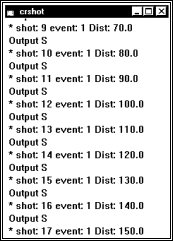 The driver setup simply defines the distance you wish between events. It must be a positive value and is measured in survey units according to your geodetic parameters. It is important to remember that the distance is measured in even increments down the planned survey line not the length of the trackline. For example, if the shot spacing is 10 survey units, no matter how well (or poorly) the helmsman steers the vessel down the survey line, the event marks will still only be generated when it passes points that are calculated at 10, 20, 30, etc survey units down the survey line.

Specify the serial port where the "S" message is to be transmitted to trigger the seismic guns.