The latest addition to the list of device drivers is the NetNMEA driver. This is a network ready driver that uses the UDP protocol to receive NMEA messages in a network environment. In conjunction with the NetNMEA driver a change has been made to the NMEA Output program in HYPACK Max to allow the NMEA Output program to send the NMEA messages to a UDP port. The following instructions explain the method used to configure both the sending and receiving of NMEA messages over the network.

Before we begin the actual steps of installing the device and configuring the port a little background information about IP addresses and Ports. Every computer on a network has an IP address. This is a series of 4 numbers that are individual to the computer. These numbers can either be assigned by a server dynamically or specified in the computer statically. In this explanation the IP addresses are going to be static. Most applications of the NetNMEA driver are going to be with static IP addresses. No two computers can have the same IP address or the computers would not know when to respond to a request. A typical IP address would be 192.168.1.2. This is the address of the Server at Coastal Oceanographics Inc. To see another computer on the network the computers must have IP addresses on the same sub-net. This brings us to the other half of an IP address. The Sub-Net. A sub-net is another series of 4 numbers that help define the network. In this application for the computers to see each other the sub-net must be the same. Now a bit about ports. Every computer has certain ports set aside for particular functions. Port 21 for example is the standard FTP port of the computer. Port 80 is the port used to access Web Pages on the computer. Ports are similar to windows. To hear what the neighbor is telling you, you have to be at the right window. Generally pick a port that is not used by the computer for something else. I used port 6650.

Now that the boring network stuff is done we can begin the actual setup of the computer to use this. To add the NetNMEA driver to the Hardware configuration start Hardware as you normally would and select Devices -> Add Device. The NetNMEA is listed in the device listing as NMEA-UDP just below NMEA-0183. Add this device to your setup. The configuration of the NetNMEA is similar to the NMEA driver.

The options for the NetNEMA driver are the same. I have chosen just position, speed and heading here. If I were setting this up to monitor another vessel the Echosounder option would most likely be checked as the NMEA Output program can convert the depth from the other vessel into a NMEA depth string independent of the type of Echosounder that is actually used. 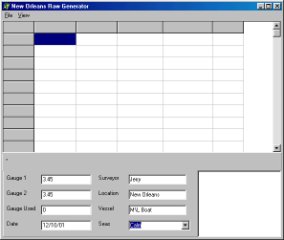 The biggest difference between the NetNMEA driver and the standard NMEA driver is the Connect option. The NetNMEA driver uses the Connect to: Network option. Select the Change settings button to specify the port. The Hardware program was originally designed to have an IP address, Port and Computer Name for the remote computer. The only item that is required is the Port. 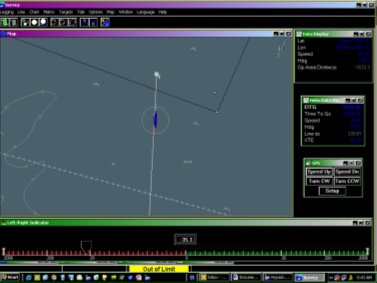 Remember from the boring network section that a port must be chosen to allow the data a window to pass through to us. This is all that is required to receive NMEA over the network.

There are two dredges that are running in a Construction project. They are connected via a high speed wireless network. The dredge company decides to show both vessels on the screen in both dredges. This is our sample project. ( Yes, this is being done.)

Both dredges have GPS, Gyro and Depth. To configure the dredge with the ability to see the other dredge the NetNMEA driver must be added to the Hardware configuration of both dredges. The port must be different for each pair of connectors. Dredge 1 NetNMEA receives data from Dredge 2 NMEA Output program. They should have the same port specified as should the other pair. This device is added to another mobile in the hardware configuration. When the Survey program is run the user must start the NMEA Output program in Survey under Options -> Shared Memory so that data is sent to the other dredge. Once the program is running and the appropriate messages are selected the user starts sending data and the other dredge should be able to see the mobile on screen. If depth is desired for the other dredge send the DBT message and configure the receiving dredge with that message.