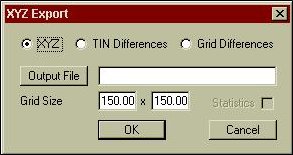 While I was down in Florida demonstrating the TIN MODEL to a client, I was surprised to see that the XYZ Export options in TIN MODEL had been expanded. Instead of being included in the Matrix Export window, the XYZ Export now has its own window, shown in the figure to the right.
It was a little confusing at first, but I quickly figured out the available options. 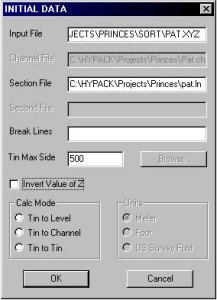 XYZ:
This is similar to the old XYZ Export option of the TIN MODEL. It is used to output a gridded ASCII XYZ file at user defined spacing. The user can enter the X and Y spacing (150 x 150 in our example above). The TIN MODEL program then takes the current surface model and determines the Z-value of the model at the grid’s nodes. It exports these values to the user-supplied name.

TIN Differences:
This was also available in the old TIN MODEL version. It is used to generate a model that represents the difference in z-level between two input models. A good example of its use would be in a beach erosion study, where you have two surveys done at different times of the year.
This routine takes the primary model (shown in red) and computes the level above (positive) or below (negative) a secondary model (shown in black). Each computed difference is then saved as the z-value for the x-y pair. The result is an ASCII XYZ Difference file that can then be read back into the TIN MODEL to show where material has accumulated or depleted. By calculating the volume of the differences above/below the 0 level, you can determine if you have had a net gain/loss of material during the study. 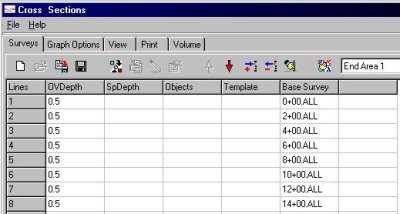 Grid Differences:
This is a new routine for the TIN MODEL. It is similar to the TIN Difference method, but instead of outputting the z-differences at the nodes of a model, it outputs the z-difference between two models at the user-specified spacing.

In the example shown to the right, the program would compute the z-difference (primary z-value minus secondary z-value) at a regular spacing, as defined in the XYZ Export window.

The resulting file can also be read back into the TIN MODEL to compute the net gain/loss of material between the two surveys.

All of these output files are in ASCII XYZ format and can be imported back into HYPACK® MAX or most other applications.