Tests were conducted on 1-2 March 2000 to determine the accuracy of the different volume techniques in HYPACK® Version 7.1, HYPACK® MAX (Cross Sections & Volumes) and HYPACK® MAX (TIN MODEL). Tests were run with multibeam data collected on a recent USACE Philadelphia project and with a test data set that allowed evaluation of all four box cut methods (Contour vs. Non-Contour; All vs. Shoals-Only).

A sample channel with survey data was created and is shown below. 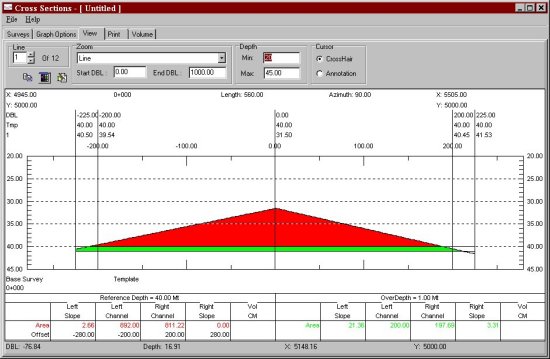 At the left toe-line the depth was above the project design depth. This meant the overdredge material on this side should be included in the Shoals-Only method. At the right toe-line, the depth was below the project depth. This meant that the overdredge material in this area would not be included in the Shoals-Only method.

1. All of the Dredge quantities are mathematically correct.
2. The Contour vs. Non-Contour and All vs. Shoals-Only only effect the Overdredge Quantities
3. All of the Overdredge methods appear to be correct, with the exception of the Non-Contour - Shoals Only method. This method is reporting erroneous quantities and needs to be fixed.
HYPACK® 7.1 Tests
(Calculated quantities in black; Mathematical prediction in red.)

1. All of the quantity calculations were very close. The largest difference was 500 ft³ on the Left Box Overdredge for the Contour methods.
2. Wow! Pretty good.

Wow! Even a little better than 7.1. These guys really know what they are doing!

Volumes were calculated using the Contour - All method for single beam data using the HYPACK® MAX and HYPACK® 7.1 VOLUME programs. Data collected with the multibeam system was also processed and volumes computed with the TIN MODEL program. The results are shown below.

1. The Single Beam techniques calculated slightly less "Material to Project Depth" and slightly more "Allowable Overdepth". The total material was less than 1% difference from the multibeam survey. This number is small for other tests done in the past. Typically, we have found the difference between single beam and multibeam surveys to yield normally up to 3% more material and sometimes as much as 6%. The above results are probably as close as you are going to see.

1. As shown by previous studies, the increased density of data points does not improve the results of the volume quantities. The longer processing time for dense data sets does not result in significantly different volumes.