What we can do in times of need

We would like to pray for the souls of those who passed away due to the Great East Japan Earthquake, and to express our deepest sympathies to the victims and their families.

A phone call after the earthquake

At 14:46 on March 11, 2011, a large earthquake with a magnitude of 9.0 and a maximum seismic intensity of 7 struck a large area of eastern Japan, particularly the Tohoku region. The tsunami caused by the earthquake reached a maximum of 40 m high, and everything ran out into the sea, resulting in a large amount of debris. It not only hindered the navigation of vessels and resumption of fishing, but also made the search for many missing people more difficult.

In such a dire situation, a phone call from an NPO early in April 2011 became a trigger for our contribution to the recovery efforts.

The request from the NPO was as follows: “the NPO is searching for missing people, but it is difficult to find them due to the extreme muddiness of the sea. In addition, the rescue team is at risk due to debris floating in the water. Is it possible to borrow an acoustic camera that can be used in muddy waters?”

We considered what we could do for help in the midst of the unprecedented catastrophe, and in conclusion, we decided to “dispatch our equipment and engineers to the affected areas, if our equipment was of any use.”

TOYO Corporation distributes various underwater exploration systems called “sonars.” Especially, we had a feeling that “acoustic cameras” and “multibeam sonars” might be useful for debris investigations and missing people searches.

The first destination for our engineers was Yamada Town, Iwate Prefecture. On April 11, 2011, two engineers departed from our headquarters in Tokyo, loading equipment such as an acoustic camera, a power generator, water, food, gasoline and sleeping bags on a minivan.

When they arrived at Yamada Bay, ships washed away by the tsunami floated everywhere with the bottom up on the surface of the water. The search for missing people was carried out under oyster aquaculture rafts and floating debris from the land. However, divers could not dive as they wanted because the water was muddy due to the sediment and debris from the land. Therefore, our engineers used an acoustic camera to investigate the location and amount of debris underwater, in order to support the divers’ safe search activities.

In addition to the sea, much debris was sunk in a swamp near the sea due to the tsunami from the sea. The swamp had not been searched before the arrival of our engineers, because the water was so muddy that the visibility was zero. The acoustic camera was also useful here. Our engineers installed an acoustic camera on a small boat, captured underwater images, and wrote down the locations of debris (singular points) on a map using GPS. The search by divers was conducted based on such data. 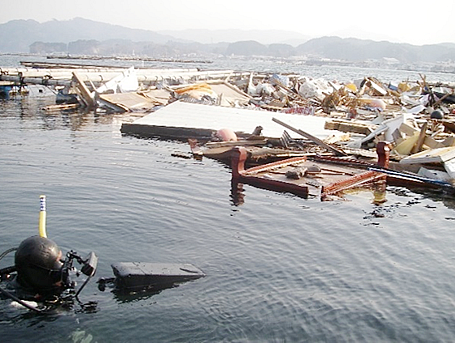 The sea of floating debris was investigated by an acoustic camera. 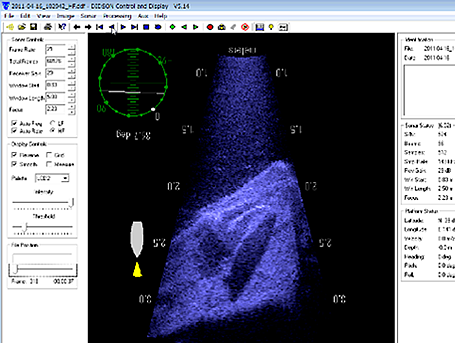 An image of debris captured by an acoustic camera

Survey of debris on the seabed

Yamada Bay is famous for oyster and scallop aquaculture. However, most of the fishing boats were washed off by the tsunami, and many of the broken aquaculture rafts etc. were sunk on the seabed as debris, making it impossible to continue the aquaculture industry. In June 2011, a seabed survey was conducted extensively using a multibeam sonar, and a seabed debris map was created. The map was useful in clearing debris, finding missing people and restoring fishing grounds. 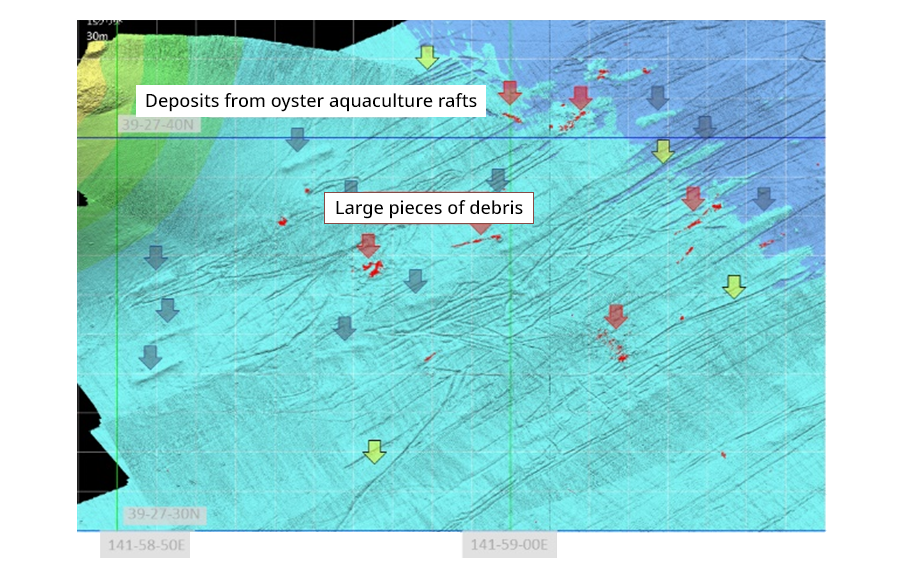 Seabed debris map: One can see traces of scratches on the seabed which seem to have been made when the mooring anchors of oyster aquaculture rafts were washed away by the backwash.

In the 6-month period between April and September 2011, our engineers went to the disaster area about 20 times for about 2 months in total. The disaster areas where we provided support are indicated on the map below.

In 2012, reconstruction work began at over 300 ports affected by the earthquake and tsunami from Aomori Prefecture to Chiba Prefecture. However, many people remain missing, and the disaster areas have not been fully restored yet.

In Japan, which is an earthquake-prone country, big earthquakes may well occur anytime and anywhere. In addition to earthquakes, it is necessary to be prepared for disasters such as typhoons and heavy rain. TOYO Corporation would like to contribute to disaster prevention and post-disaster reconstruction through our unique competence, i.e. "measurement" technology.