Supporting the passion for submarine searches with technology

Ro No. 500 Submarine (hereafter Ro 500) is a U-boat which was transferred from Germany, which was in alliance with Japan during World War II, to the Japanese Navy as part of a technical exchange in 1943. After being used mainly as a virtual enemy ship for training, Ro 500 was scuttled in Wakasa Bay in 1946 after the end of the war.

La Plongée Deep Sea Engineering Society (hereafter La Plongée), of which Prof. URA is the representative director, conducted the “Ro 500 Search Project” off the coast in Wakasa Bay in June 2018. The marine technology of TOYO Corporation played a major role in the search and discovery of the Ro 500, which had been on the seabed for more than 70 years.

Why did Professor URA choose TOYO Corporation as partner for the “Ro 500 Search Project”? We will look back on the volunteer activities after the Great East Japan Earthquake that was one of the reasons for this partnership.

In 2018, La Plongée embarked on the “Ro 500 Search Project.” Professor URA explains the significance of aiming to discover the submarine of an unknown location, more than 70 years after it was scuttled. 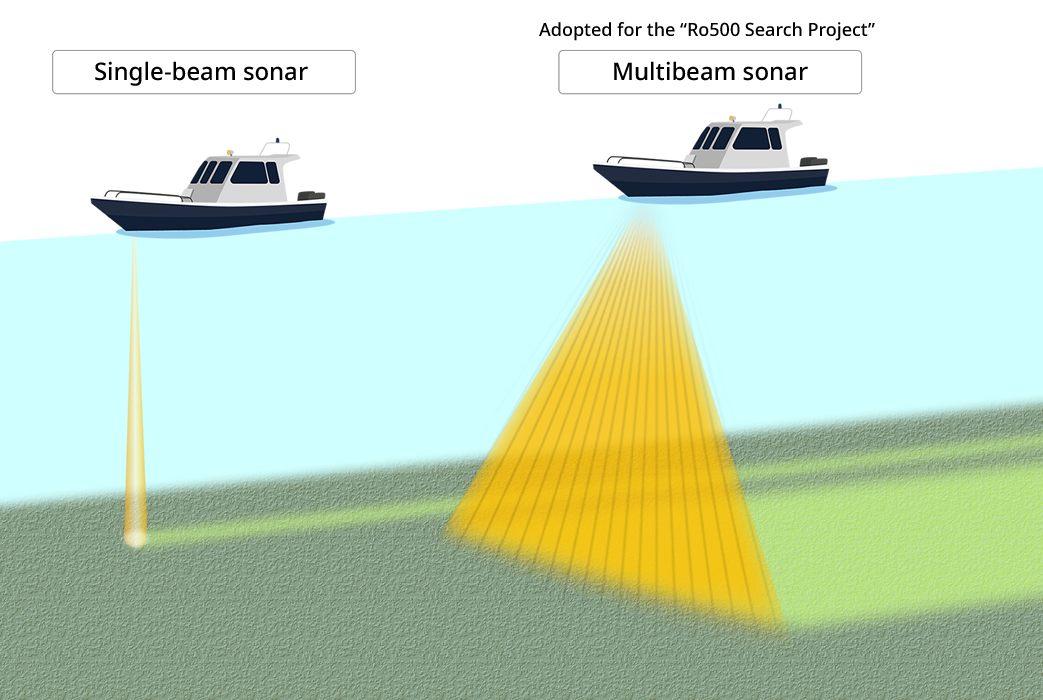 "About 40 years ago, the survey was conducted with a single-beam sonar. Unfortunately, a single-beam sonar can only survey the seabed linearly. Accordingly, errors and gaps that cannot be surveyed are likely to occur on the entire seabed. I thought the results would surely be different when surveyed with a state-of-the-art multibeam sonar, which allows a wide area of seabed to be surveyed accurately and without gaps."

Therefore, Prof. URA planned another survey of the seabed of Wakasa Bay with a multibeam sonar as the first step of the project. As technical support staff, an employee of TOYO Corporation also boarded the research vessel. Thus, the "Ro 500 Search Project" finally started on June 18, 2018.

Ro 500 became visible by a multibeam sonar 72 years after it was scuttled.

TOYO Corporation provided technical support for the seabed survey using a multibeam sonar "SONIC 2024." The multibeam sonar can emit multiple sound waves in a fan shape from a ship to create a 3D topographic map of the seabed. This allowed us to discover three submarines on the seabed, while only two had been found 40 years ago. From this survey data, we were able to obtain 3D modeling images of three submarines including Ro 500. 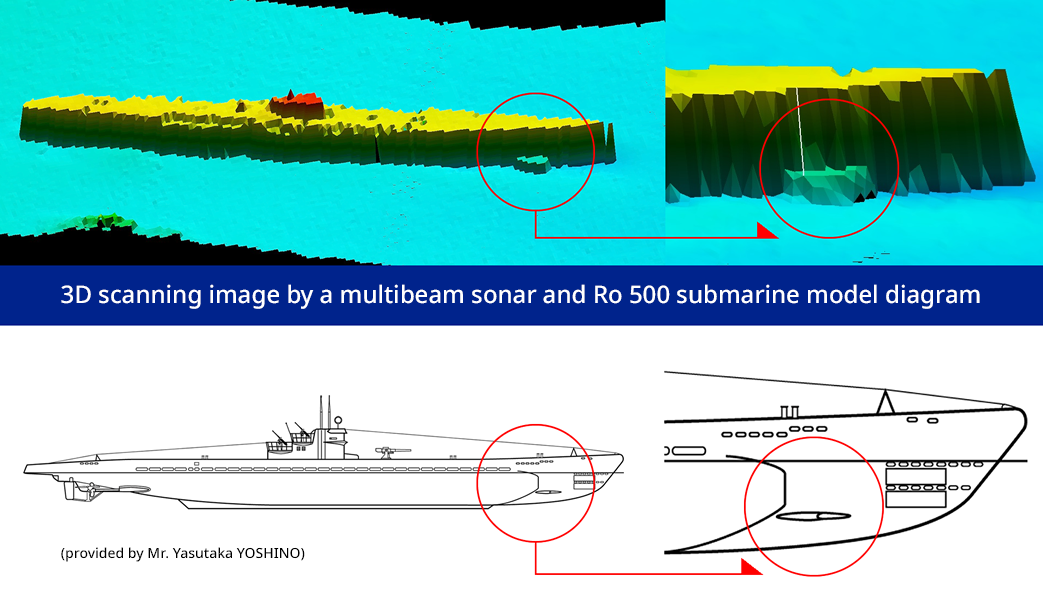 “Based on the 3D image created by the multibeam sonar, ROV (remotely operated vehicle (underwater robot)) was used to search for a submarine with a rudder unique to a U-Boat IXC-type submarine (the predecessor of Ro 500). The decisive factor was the mooring hole (a hole at the center of the bow), which was very similar to that of the U-boat IXC type. It was a historic moment when we were able to shed light on the Ro 500 for the first time in 72 years,” Prof. URA said, looking back with deep emotion.

Ro 500 rediscovered after 72 years as a valuable teaching material

ect was completed, La Plongée publicly disclosed the accurate location information for all the three submarines, Ro 500, I 121, and Ro 68. Professor URA explains the purpose as follows.

What is submerged in the sea is invisible, and what is invisible can even be forgotten. The appearance of Ro 500 gives us an opportunity to think about the war again.

TOYO Corporation will continue to support Prof. URA's passion for ocean survey and his unwavering pursuits.